Photo by Chad Madden on Unsplash

This is a joint project by the Centre for Internet and Society and Tattle Civic Tech. In the first year of its development, it was funded by Omidyar Network India as part of their Digital Society Challenge grant.

The tool that emerged out of this project, is called Uli, and has its own microsite. To download the tool and learn more about it please go to Uli's website.

The graphic narrative titled ‘Personal (Cyber) Space’ published in 2016 by Parthasarthy and Malhotra narrates an experience of a young internet user. The animated short comic hosted by Kadak, a South Asian women collective, asks: ‘If one says something, there’s the fear of hateful response. But if one doesn’t say something, isn’t that silence counterproductive?’ only to end with the question, ‘so what does one say?’

Violence, abuse, and hate speech on web 2.0 has become pervasive to one’s experience of social media and the existing scholarship suggests that it is those situated at the margins who are worst affected. The question posed by the comic evokes a range of problems that are at the heart of this everyday violence. The problem of online violence encompasses within itself legal, political, social, cultural and technological complexities that make any easy solution impossible. This overdetermined nature mandates that we seek solutions from multiple avenues.

Funded by Omidyar Network India as part of their Digital Society Challenge grant, the Centre for Internet and Society and Tattle Civic Tech are building a free-to-use user-facing web plugin. The plug-in will help users to moderate instances of online violence in Indian languages with a focus on the experience of persons situated at the margins of gender, caste, religion and sexuality.

The project borrows from feminist approaches to Machine Learning technology and aims to intervene into the ongoing debate around content moderation. The existing algorithmic approaches to automated content moderation strategies are generally biased towards English-language content paying very limited attention to social, cultural and linguistic diversity elsewhere. Moreover, the existing approaches understand moderation through a binary logic of: leave content up or remove it. With multiple political and legal implications emerging from these biases, the existing approaches threaten to pose more problems rather than solving them. With this tool, the project aims to redress these problems and find creative ways in which moderation can empower multiple users, especially the ones that are most affected.

Through extensive qualitative data collection methods and participatory analysis, the project will seek participation from different communities to arrive at a co-liberation model. This model will be based on needs articulated by communities, rather than the priorities of powerful institutions. We will also aim to make our model for content moderation transparent and easily understandable for users. Our methodology, annotation guidelines, datasets, and the limitations in the dataset will be archived in public repositories online. Through this, we will aim to raise awareness about content moderation systems and gender-based violence online.

The ultimate aim of the project is to envision creative and collective responses to the structural problem of violence experienced online and help build solidarity and shared understanding while empowering users to take back control of their digital experience.

The moderation decisions of social media platforms often make international news. Some decisions can be attributed to error. Machine learning system, like every prediction system, makes errors. But some decisions reflect the social values in the data and algorithms behind the model. So, what many communities find harmful may not be harmful as per the guidelines set by social media platforms. Machine learning tools can also be designed to reflect the values of those at the forefront of tackling violence, to protect those who will be at the receiving end of the violence. This is precisely the goal of our project.

We have identified the following stakeholders for our plugin:

At the beginning of the project we identified a list of features that could be built into the plugin, that would help identify or respond to OGBV. But, we are in year one of the project with a goal of piloting the plugin by May 2022. Thus, we will have to prioritize a few features for the pilot stage. The following grid reflects one assessment of the effectiveness of the features. This assessment is being evaluated through focus groups and workshops with the identified stakeholders. 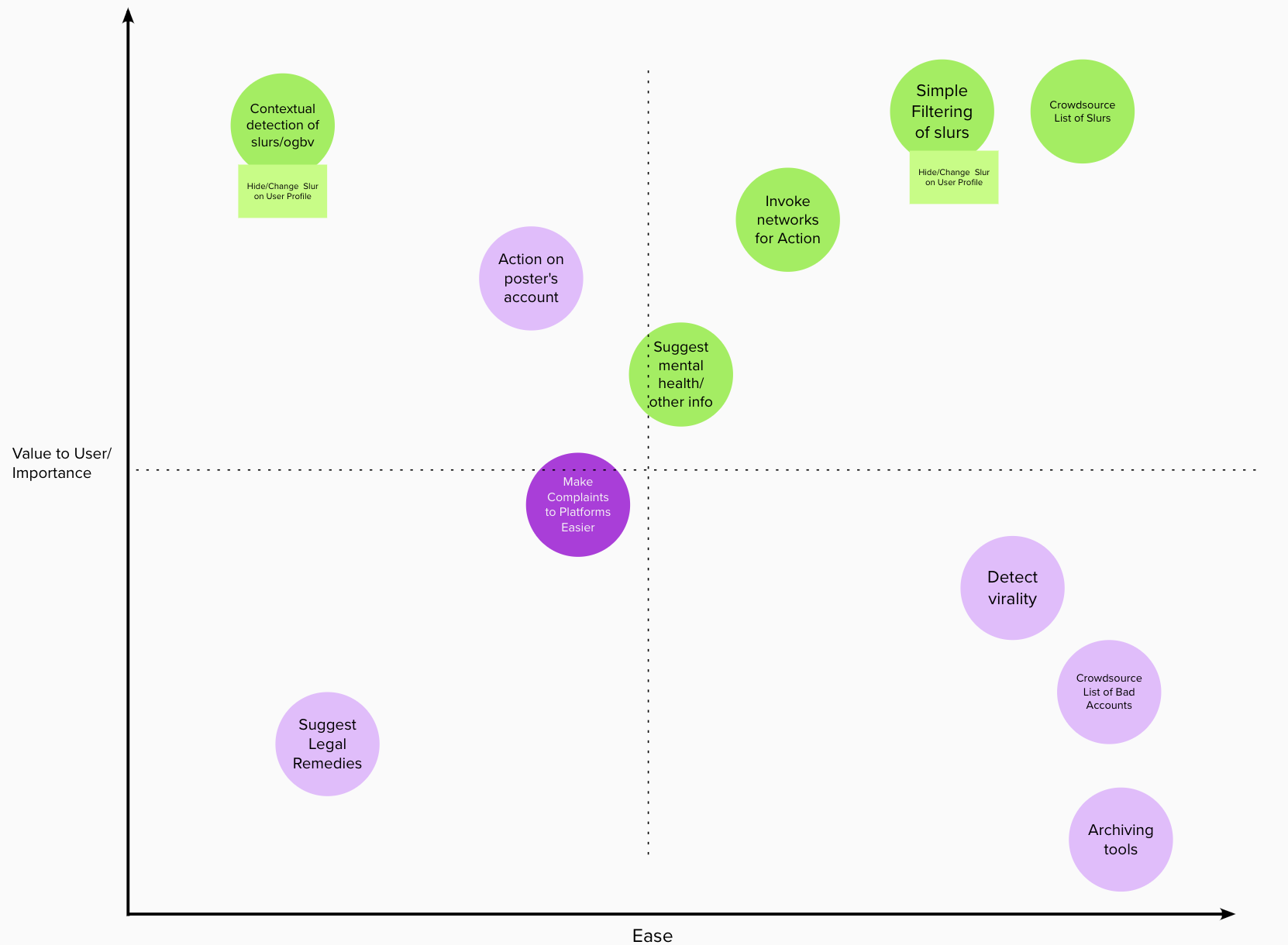 For more details on this project please send an email to one of the following email IDs: